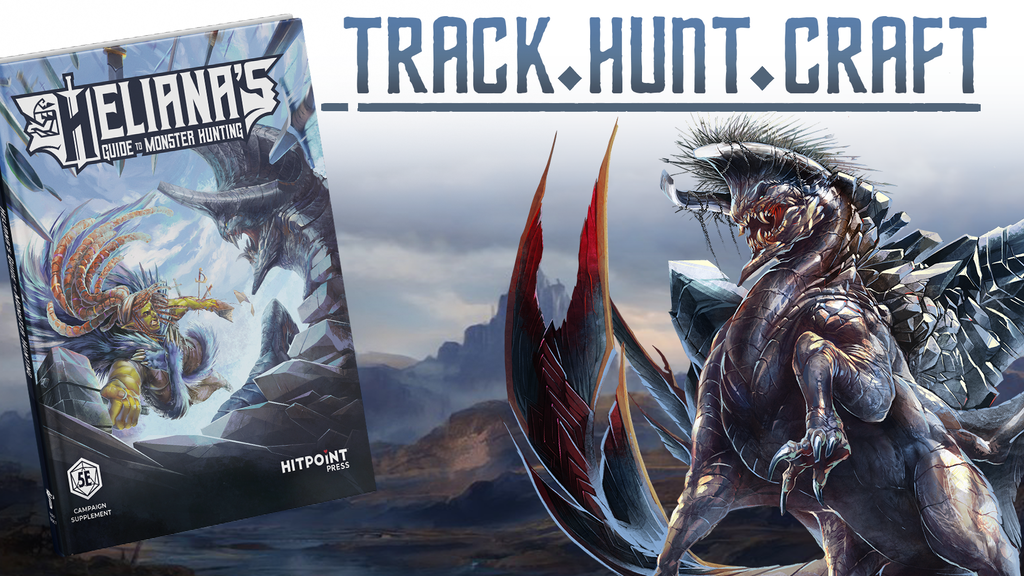 Oh we were so excited to unlock these - a big thank you one and all. The book (and PDF) will have 5 new player races in it :)

Here is a graphic to show you everything you need about the pledges.  It is also available right under the pledge tier graphics on the KS page

At $800k we'll commission ambience soundtracks for each of the monster hunt adventures from the behemoth of ambience creation, Michael Ghelfi! These seemless ambience loops will tickle the ears of your players with howling winds, jungle fauna, and creaking floorboards. Try using this swamp soundscape with the Shadow of the Broodmother free taster PDF!

The pièce de resistance of your aural stimulus package - the monster soundscape. Lets get roars, screeches, and tsssskikikikimauwks to terrify your players!


A Project We Love - Kibbles' Compendium of Craft and Creation

Kibbles is a homebrewing powerhouse and released a compendium of their work.  Pre-orders are still available!

Years of design. Thousands of playtesters. Evocative art. This Compendium brings KibblesTasty's most popular systems together into a single book containing:


P.s. Jess Jackdaw will be doing a stream to reveal the new races that were just unlocked next Tuesday 8th,  at 12 noon EST on YouTube. Subscribe to his channelso you don't miss it!

They're alive! THEY'RE ALI- no wait they're just animated.  Ten animated familiar cards will now be included in the Deluxe Box tier! If you were thinking of bumping your pledge, these cards have some serious cute factor! Also available as addons :)

The digital version of the Crafting Catalogue will be included with any tier that includes the PDF (so ... all of them), and for any $1 tier backer who buys the PDF. You can give this to your players when they ask about crafting and harvesting :)

At $700k you'll be able to cook the best damn genetically modified steak and ale pie with the help of the School of Biomancy wizard, and the College of Cuisine bard! If we hit this stretch goal  there will be 4 more subclasses added to the book, for a total of 8 subclasses (and the monster tamer class).

Want to play a raccoon, chicken, or cyclopian? Then we just need to hit this next stretch. If you share this campaign on your favourite social media platform we can get more content for everyone :)


A Patreon We Love

Okay. Full disclosure. It's our own Patreon xD . At Loot Tavern we create new items—including art and mechanics—every week day. These items, like the ones in this campaign, can grow with your players. We also have a compendium with over 180 illustrations, and over 400 items including rarity variants.

You've smashed another one! Here's godzilla taking a bubble bath. Or farting.

The Game Ready, Core Box, and Deluxe Box will all receive L'Arsène's Crafting Catalogue for free! Everyone else can add it for $15 as an add-on :)

At $650k, our very own Jess Jackdaw will assemble an array of sounds for each boss monster. Send tingles up your players' spines with roars, howls, and the ubiquitous rawsfhhjlkkr noise.

It's quickly coming up! Animated lenticular familiar cards are our next goal. We're very excited about these ones - they make the illustrations even cuter!


Catch you all tomorrow. As always, thanks for helping us make this possible. We appreciate your support so much!

10 original songs will be written and recorded for this Kickstarter! They'll be available to all backers who receive a PDF!

The eagle-eyed amongst you have been informing us of a few mistakes in our text and addons. We'll address these directly.

Gelatinous Ooze Dice. These are made of resin. They are NOT made of metal. We can't change the description., now, so think of the 'metal' adjective being used in the sense of "that's so metal, dude".

Stretch Goal Addons. The GM screen, Card Pack 3, and Deluxe Book have all been made available as addons!

Digital Handout Addon. Heliana's Handouts are being made available as a standalone digital add on. Remember: these are also included in the Digital Asset Bundle and the VTT Adventure bundles, and comes with the physical handouts (which are included in the Game-Ready Core Box, and Deluxe Box tiers).

If we hit this goal, we'll add 5 new playable races, including the rakin, gobboc, and cyclopian. Check out L'Arsène's Ludicrous Larceny for a sneak peek of the Rakin beta version.

This player-facing book has all your players need to know for crafting and harvesting. Keep your players' dirty mitts off your deluxe book! Included gratis for Game Ready, Core Box. and Deluxe Box backers. If you were thinking of bumping up from the book-only tier, this might be what you need!


Project We Love - Into The Mother Lands

A thousand years ago, African emperor Mansa Musa sent an expedition to "The New World" that never arrived. In the mythos of Into The Mother Lands, these explorers were instead transported to a strange new world far, far away.

I (Max) am a sucker for the "teleported to another time and place" trope. The "We were teleported and now it's the future" idea has got me really interested in this new TTRPG system. It's Wakanda meets Star Trek brought to you by an all PoC cast of creatives. You can also follow this as a live playthrough on twitch and on podcast. Check out the campaign here.

Moooooooo-re add-ons available as we hit $200k and unlock the GM Screen! Join us on Discord to discuss what you want to see on a GM screen!

The new goal is for 10 animated familiar cards! On the front, these tarot cards will have an ~8 frame moving image of the familiar. On the back it'll have the familiar's unique abilities! Here's a mockup of an (un-animated) card!

Good GMing is about stimulating all 5 senses, not just sight.  These bard recordings add a unique dimension, and will provide in-game monster hunting clues, and celebrate your adventurers achievements. Share our campaign anywhere there's TTRPGers so we can smash this next goal, too!


Project We Love - The Prophecy of Nine Omens

The Prophecy of Nine Omens has foretold that three legendary orbstones will cause death and destruction throughout Eastern Farraway.
The orbstones must be destroyed to avert the prophecy and stop the cataclysm.

You have to cunningly steal the orbs from a heavily protected vault and transport them across the sea to the secret location of the sunken city of Sirenholm. Only there, in the heart of the underwater Temple of Tanaaris, can the orbstones be obliterated.

Gather your companions. Bring your swords. Choose your spells wisely.
Are you ready to save Eastern Farraway?


We like this one for a few reasons. (1) It has solid writing and layout, (2) the adventures are scalable to play at other levels, (3) they offer options for lower incomes, which is a real human touch after this past year. This is a classic D&D adventurin' with all the bases covered, including VTT!


The campaign has finished, but late pledges are still open (for now!). Check it here.